For the players' agent Alessio Sundas there is no doubt: ‘Italy will play the final against a ghost’ 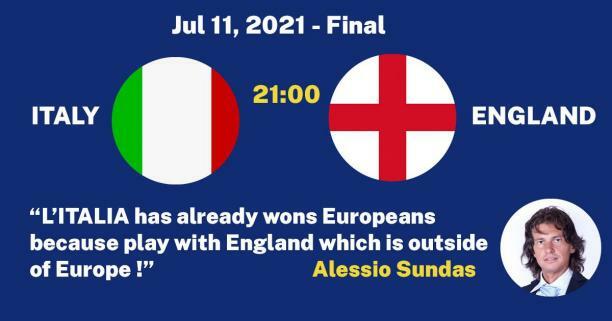 Alessio Sundas has no doubts: Italy has already won the European Championships as the national team will play the final against a "ghost", England. Obviously, this immediately appears to be a sort of provocation, but, in reality, it isn’t at all and, the sports manager, also explained the reasons. Specifically, we’re all aware of the fact that England has decided to leave Europe, so, following the logical thread, consequently they should not even have played in the matches of the Europeans. A consequential factor that should also have been translated into sporting terms. Sundas himself reported: “England is no longer part of Europe, so it shouldn't even have participated in the European Championships. For this reason - continues the Italian sports manager - the match that will take place on Sunday 11 July cannot be considered a real final. Basically - he explains - he didn't even have to be in the European circuit, as he is no longer in the EU. Among other things - continues Sundas - they have their own currency and it isn’t conceivable that you are playing against Italy. Since they have failed to fulfill all the duties envisaged by the European Union, consequently Italy is as if it were playing the final against a ghost". Eleonora Boccuni